Khairul Hisham of Hishgraphics (http://hishgraphics.com) conducted this interview and asked the following questions to Mike Vilardi (http://caesar120.deviantart.com) about his professional experience in the Gaming Industry as an illustrator. If you played the Star Wars Roleplaying Game, you’ll recognize Mike’s artwork when he worked with West End Games. His art was also regularly featured in the Star Wars Adventure Journals, organized and run by Peter Schweighofer (http://schweiggadejo.blogspot.com).

I’m happy to announce: I’m working with Mike Vilardi, and have commissioned him for several illustrations for Westward. Attached to this Interview are two roughs Mike sent to me yesterday. We’ve assembled a talented team of artists to help us finish up this book, and I couldn’t be more proud.

So without further ado, here is the interview…

Khairul: 1) “What do you think of your artwork for Star Wars inspiring new artists long after Star Wars RPG D6 became defunct?”

Mike: “In a word? Surprised…and gratified. Two!  In TWO words: surprised and gratified…and thrilled. Three! Three words…that’s it!  When I started with West End Games it was all about the thrill of getting a chance to become part of the Star Wars universe. It was my opportunity to contribute to a “world” that had shaped my impressionable teenage imagination. It has been very gratifying to learn that my Star Wars artwork has made such a beneficial impression on those who were (and are) so dedicated to the game.  Some of whom were inspired to become artists themselves.  In my opinion…it just doesn’t get any better than that. A very pleasant surprise indeed!”

Khairul: 2) “What tools do you use for inking and coloring and how has your use of tools changed over the years?”

Mike: “West End assignments were executed in the usual stages: pencil, ink, and (when called for) color.  Copies of all penciled illustrations had to be submitted to West End…who then forwarded them to LucasFilm for approval. Every element of every illustration was scrutinized to make sure it fit the Star Wars mold.  (I heard a rumor about one unfortunate artist who had all his illos rejected because the clothing didn’t fit the SW style closely enough)  Once the pencils were approved I set to work using ink pens with a variety of tip sizes, and a brush pen.  What little colorwork I was assigned was done the same way. Then I used watercolor and colored pencils.  Unfortunately those tools haven’t changed over the years. I’ve been slow to react to the technological advances that the publishing world has so readily embraced. So this “dinosaur” needs to bend a few grey-cells, pick up some new skills, and get in the digital game.”

Khairul: 3) “How did you achieve the screentone shading in your artwork? Did you use zipatone?”

Mike: “My initial impression of gaming books at that time (late 80’s) is that the art, in general, lacked depth and detail. Understandable considering the amount of money paid per illustration. A working artist (also see  BUSY artist) would be looking to be as efficient as possible with each image. I was, however, neither a working artist…nor was I a busy one. In fact, I was working at a micro-electronics plant doing chimp-work…so I could afford to put as much time and effort into each illo as time allowed. And I did. I tried to pack in as much interest as I could, which included the use of peel-and-stick shading film (ziptone).  I liked to use several different patterns in each drawing to add depth and variety for the eye to play with, and enough detail to spark creative interest in the gameplayers.  These were expensive books! I really felt an obligation to at least try and make them a better buy.  The process of zipping, however, was very time consuming. Not a good thing when you’re trying to meet a tight deadline. So I soon found that I either needed to skimp on the quality, or find a new way of doing things. Skimping on quality didn’t sit well with me, so I instead decided to try a fairly new graphic arts product called Unishade and Duotone paper.  It was a paper-board with a nearly undetectable shading pattern printed onto its surface.  After the ink stage I would use a brush to apply a developing fluid to the areas of the image that I wanted shaded and, presto-changeo…the pattern would appear like magic!  Back then it truly was amazing, but advances in computer-based graphic arts programs soon rendered these wonderful papers obsolete.  Sadly, the production of Unishade and Duotone paper ceased in 2008.  I still have sizable remnant pieces and scaps, but I no longer have any of the developing fluids. If there is anyone out there that knows where I can get some (or an alternative method of developing the patterns)…I’d love to be able to use up what I still have.  It’s “old school”…but then again, so am I!”

Khairul: 4) “What inspiration do you draw upon when you create new aliens and creatures?”

Mike: “I find a lot of inspiration in…nature. I believe in a firm foundation of  human and animal anatomy. If you know what you’re twisting…it makes the twist more natural and believable.  I only had one year of art college, but most of that year was spent in Life Drawing class drawing the human figure…or in the nature lab sketching a wide variety of life forms.  Another well-of-inspiration can be found in the artists I admired as I grew up.  It’s only natural to be influenced by the imaginations that helped shape my own.”

Khairul: 5) “How did your artwork crossover into your actual gaming sessions?”

Mike: “I think I once sat-in on a gaming session.  I wanted to understand how the books were being used, and more specifically, how the illustrations played a role in the game.  Other than that…I must sheepishly admit that I have never played an RPG.”
… 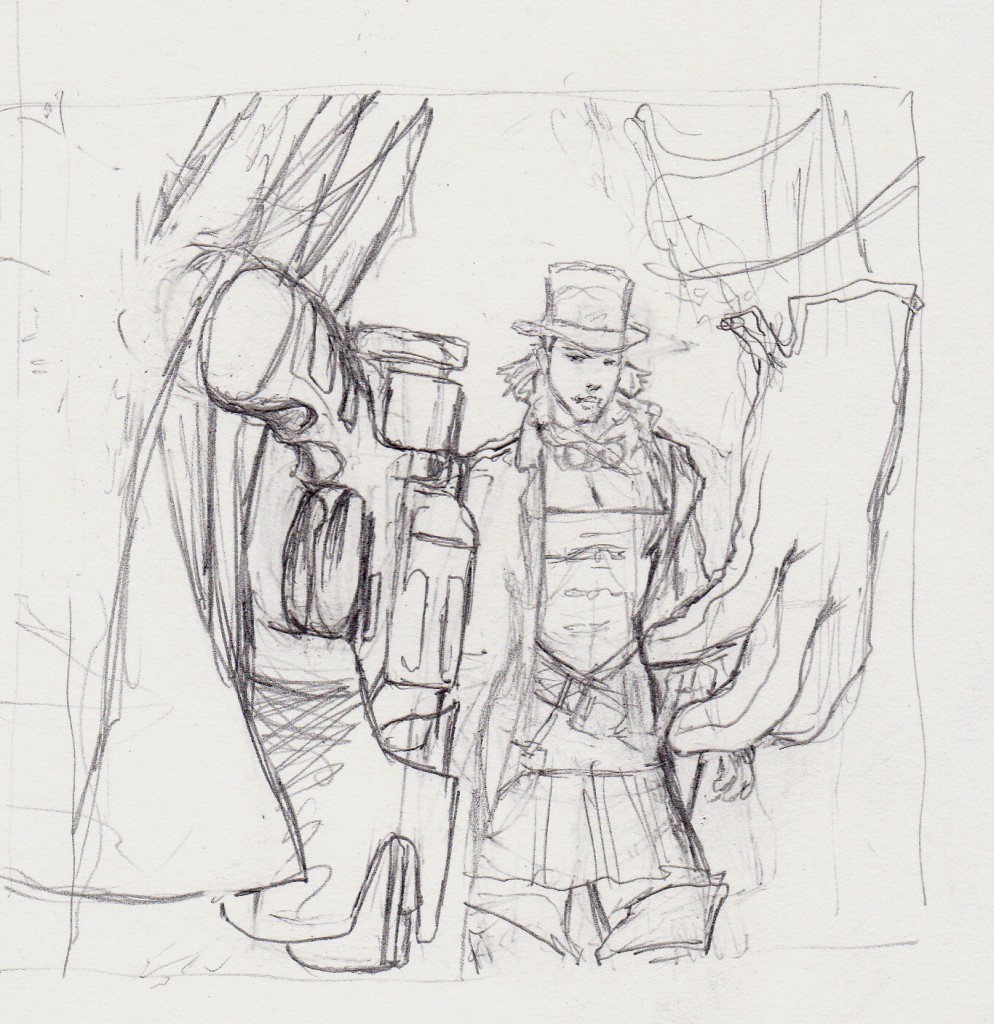 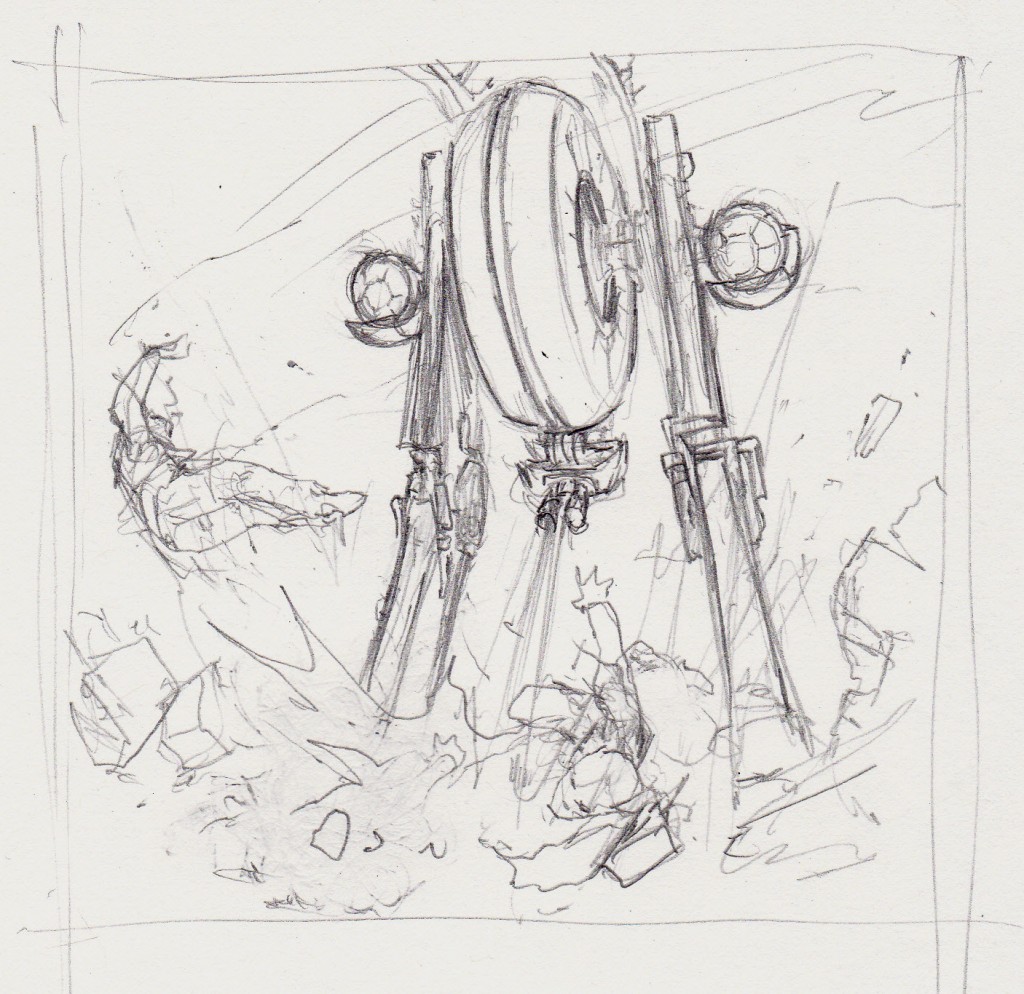